Christmas Around the World — Mexico 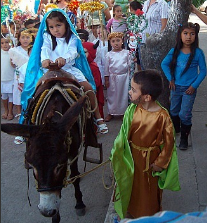 The Christmas season in Mexico lasts about two months and is filled with traditions that have lasted, in some cases, for nearly five hundred years.

Nativity scenes, known as Nacimientos, were first seen in Mexico possibly in the 18th century. Many families take them out of storage on or before December 16 to inspect the pieces for damage and decide if they will purchase new figures. By December 16 nacimientos will be set up in homes, churches, store windows, government and business buildings, plazas, and public parks. They may be a simple grouping of the Holy Family to an elaborate display of the town of Bethlehem with a helping of local flavor added. Whether the display is simple or elaborate one will always find figures of Mary, Joseph, and the Christ Child and a stable. Mexican nacimientos are very distinctive in the way they are constructed. One may find animals and other figures not in the same scale or clothing and furniture not from the same time period. Scenes from the Bible not connected to the birth of Christ may be included like Noah and the ark, the crucifixion of Christ, or other scenes. One may also find characters found in a typical Mexican town or city like a taco seller, balloon vender, a village beauty, and some vaqueros. Many of these figures are carved from a very light wood like cork or balsa then covered with plaster and painted with brilliant colors. Costumes may be hand-sewn. Hay, moss, sand, small huts, snow, and other materials may also be used to complete the scene.

Las Posadas commemorates Mary and Joseph's search for lodging when they arrived in Bethlehem. This procession takes place nightly for nine nights starting December 16 and ending on Christmas Eve. Usually led by a child dressed as an angel and two other children carrying figures of or dressed to portray Mary and Joseph, groups of children followed by grown-ups then by musicians sing posada songs and carry lighted candles as they parade through the streets. Some children will blow high–pitched whistles as they march. When they arrive at the designated house the group splits in two: the holy travelers and the innkeepers. The travelers ask the innkeepers for lodging. The innkeepers refuse saying they have no room in their inn. After repeated entreaties the innkeepers give in and welcome the travelers into the house. Once everyone is in the house the participants enjoy a party with food, fireworks, a pinata, and fun. On the 9th night an image of the Christ Child is also carried in the procession. The image is not included on the other nights because the Christ Child was not born until Christmas Eve. When the travelers were invited into the house that final night the image of the Christ Child was brought in and placed into the family's nacimiento. Today posadas take place not just in Mexico but in San Diego, California; Santa Fe, New Mexico; Chicago, Illinois; and many other places where a significant Mexican presence resides.

Pastorelas, Mexico's version of Europe's medieval miracle plays, were first introduced by missionaries to teach the natives the stories of the Bible in the 1500's. These plays were often performed outdoors so as the Christmas versions of these plays became Christmas traditions they continue to be performed outdoors in a public square, the courtyard of a church or inn, or the patio of someone's home. They may be performed by local towns–folk, school children, or semi-professional actors. Most pastorelas are handed down from generation to generation and are not written down so plot twists and local color is evident in many of them. The plot of the Christmas pastorelas is the pilgrimage of the shepherds to Bethlehem to see the Christ Child. Included in the cast are a varying number of shepherds, Lucifer (the Devil) who tries to prevent the shepherds from completing their journey, a hermit, and one or more angels. Some local pastorelas may include additional rolls. Audience participation at these plays is encouraged. Good guys are praised, and bad guys are booed and hissed. Pastorelas are a colorful, well–loved Mexican custom of Christmas.

Children in Mexico love attending parties where pinatas are present. Pinatas were brought to Mexico in the 16th century by missionaries. They were initially used as a religious symbol with a moral. The pinata is Satan. The treasures inside the pinata are temptations. The blindfolded person is blind faith whose mission is to destroy evil with the stick of virtue. The released goodies is the reward for living a virtuous life. The lesson of the pinata is all things come through faith.

Nearly all Christmas parties with children have one or more pinatas. Some adult parties will have them also. Once made with a large clay pot decorated with crepe or tissue paper, papier–mache, tinsel, and paint, pinatas are made mainly with cardboard and papier–mache and may be store–bought or hand–made. Pinatas are made in a wide variety of shapes such as owls, parrots, burros, peacocks, lambs, clowns, flowers, stars, TV or movie characters, fruits, vegetables, moons, boats, airplanes. Just about anything imaginable. They are filled with candy, nuts, fruit, and sometimes small toys and hung up by a rope threaded through a hook or pulley so it can be swung and raised or lowered. A child is then blindfolded and spun around until dizzy. The child is given a stick with which he or she tries to break the pinata. Several children take their turn swinging at the pinata until it is finally broken releasing the goodies inside. After the pinata gives up its treasure, the children race in to pick up the goodies.

Also in Santiago Tuxla, Veracruz, from December 16 to 24 groups of people carry la rama, a branch decorated with paper chains and strips of colored paper ribbons, Japanese lanterns, and small clay figures of shepherds, donkeys, angels, among others. Many time musicians playing instruments made from tin cans accompany the branch. At each house the group visits aguinaldos, or gifts, of money, fruits, or candies are demanded.

In Queretaro on December 23 a Christmas parade of decorated cars and trucks pass through the streets of the town. On December 24 another parade featuring floats with Biblical themes built on platforms on top of cars with live actors and even animals is enjoyed by the inhabitants of the town.

In Oaxaca (350 miles southeast of Mexico City) December 23 is known as Le Noche de los Rabanos, the Night of the Radishes. Radishes are carved into remarkable shapes and turned into religious scenes, landscapes, replicas of bullfights, skillful reproductions of devils, men riding burros, horses, or elephants. The radishes are judged, and prizes awarded in various categories.