Christmas Around the World — Ireland 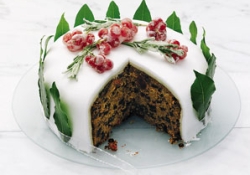 Christmas in Ireland, with all its religious overtones, is a time for family. The religious nature of an Irish Christmas begins with Advent. Starting four Sundays before Christmas Advent is a time to ponder the birth of Christ and get ready for the celebration of His birth. It is a time for confession of sins and for expressing sorrow for wrongdoing. One must be holy when expecting a holy Visitor.

Much must be done to prepare for Christmas. Houses must have a thorough cleaning. The grounds and all out-buildings get a good tidying also. Christmas cards are sent to neighbors, friends, and family members. Most of these cards have religious themes but Santa Claus, reindeer, and snowy landscapes may also be seen.

If one lives in the Irish countryside one may walk the hills and forests gathering holly and ivy to be placed on the mantelpieces, around windows, on doors, and around pictures. Those who live in the city may purchase their greens at a local market. Small signs proclaiming "Happy Christmas" or "Season's Greetings," homemade or purchased, are hung throughout the house. Lighted candles placed in the windows are a must in every Irish home. If not placed in purchase candleholders these candles may be placed in candleholders made from large turnips. Most homes include a nativity scene in their Christmas decorating. The creche is set up a few days before Christmas with the three wise men not showing up until January 6.

Christmas trees did not become a regular part of Christmas decorating until the 1960s. Some people put their trees up the first week of December while others wait until Christmas Eve. Electric lights, tinsel and a variety of purchased and homemade ornaments adorn each tree.

Even churches get in the spirit of the season by decorating the pillars and the altar with garlands of holly leaves. A nativity scene is also part of every church's display usually found near the altar, in the back of the church, or outside in front of the church.

Gift giving in Ireland tends to be less lavish than in other countries like the United States. People give gifts mainly to members of their immediate family only. Shopping for these gifts begins on or around December 8. At one time gifts were confined to food items or items made in close proximity to where one lived. Now gifts from all over the world purchased in Dublin make their way to Irish homes all over the country. Gift giving is not limited to the walls of the house. Many people give food baskets packed with meat, vegetables, and even Christmas cakes to less fortunate families or participate in other forms of charitable giving.

On Christmas Eve and Christmas Eve day final preparations are made for the Christmas celebration. As expected, unmarried children, no matter their age or how far away they live, arrive at their parents' house. Most, if not all, Christmas shopping is done; but many shops stay open later than normal for those last-minute shoppers. The house fills with glorious odors as food preparation begins in earnest. The family goes through the house giving it a final tidying before the celebration begins. Some of the more religious families fast on Christmas Eve until dinner when a simple meal of fish and potatoes is served.

Many families wait until Christmas Eve to put up their Christmas tree. Candles are placed in the windows. For many the Christmas season is about to begin, with the lighting of the candles. Traditionally the main candle is lit by either the youngest child in the family or a daughter named Mary. Some children hang their stockings before the family goes to Midnight Mass; others wait until after mass. After returning from mass the children go to bed. After the children fall asleep the parents place the children's gifts under the tree or around the room often arranged in piles on chairs with the child's name on the chair.

Christmas morning children awaken and rush to see what Santa Claus has left for them. Most gifts are practical, but as Irish affluence increases the gifts become less practical. Some who did not go to Midnight Mass, and some who did, attend "First Light" Mass at either 6:00 AM or 8:00 AM. After mass the men and boys enjoy games of hurling (a game similar to field hockey), Gaelic football (a game like soccer), shooting competitions, and hunting rabbits with greyhounds.

The women prepare the Christmas feast and deliver gift baskets to less fortunate neighbors filled with the ingredients for a "proper" Christmas dinner. The Christmas table is covered with a linen or lace tablecloth and set with the best china, polished silver, and cut-glass stemware. The traditional Christmas dinner may consists of roast goose or turkey (often served with ham) stuffed potatoes heavily seasoned with black pepper, mashed or roasted potatoes with gravy, and one or two vegetable dishes. Desserts may include Christmas cake, Christmas puddings such as bread pudding or plum pudding, mincemeat pies or tarts, sherry trifle, soda scones, fairy cake, and cookies.

After the Christmas feast families stay home relaxing, talking, singing and playing musical instruments, and telling stories. Irish history was once passed from one generation to the next via stories told at family gatherings like Christmas. Therefore, it is not surprising that some of these stories are of family ancestry, the famine, Irish heroes and villains, the countryside, as well as the Nativity.

Like many other European countries Ireland celebrates Christmas over a period of twelve days from December 26 to January 6, also known as the Twelve Days of Christmas. Some days are known for specific activities; others may be filled with attending mummer's plays, visiting friends and family, sporting events, and dancing.

The first day, December 26, is called St. Stephen's Day and is known for the hunting of the wren. In times past a wren was found by a group of boys and chased until the boys caught and killed it. The dead bird was then paraded through town tied to a pole. It was carried from house to house where a song was sung requesting treats of money, food, or drink. Those who gave treats were given a feather from the bird for good luck. Today a straw wren, a toy bird, or a bunch of feathers are tied to the pole and the money collected is donated to a worthy cause.

December 28 is Holy Innocents' Day. On this day many attend a special mass commemorating Herod's killing the male children of Bethlehem.

On New Year's Eve the people eat a heavy meal called Oiche Coille. It is said if this meal is not eaten the family will be hungry in the coming year. As the new year arrives people make bonfires, set off fireworks, and participate in or watch parades. Churches ring their bells, and people party in pubs, lounges, and nightclubs.

On January 6, the Irish people celebrate Epiphany commemorating the arrival and adoration of the Wiseman. Churches are full of people attending mass. In many houses three candles are placed in the windows representing the three Magi. Epiphany is sometimes called "little women's Christmas." After all the preparation required by the Christmas season, women get to take it easy. They even get to go to places they do not usually frequent, like the pubs. Men do "woman's work" around the house which may explain the lighter, more "feminine" meals served on this day. Epiphany is also called a day of sadness because the Christmas season is coming to an end.

On January 7, families take down their Christmas decorations storing their permanent decorations until next Christmas. The Christmas tree and other greenery are taken out and often burned. Thus ends another joyous, reflective Christmas season.