Christmas Around the World — Germany 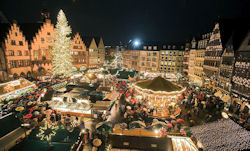 Christmas celebrations in Germany start on November 11 with the celebration of St. Martin's Day. St. Martin's Day remembers Martin, a Roman soldier, who, when riding through the countryside on a cold day, met a beggar asking for alms. Martin had nothing on him to give but, noticing that the beggar was cold, took his cloak and cut it in two pieces and gave one piece to the beggar. That night, after Christ appeared to him in a dream, Martin devoted his life to service to God.

On St. Martin's Day children receive small gifts and eat treats, mainly currant buns. They make homemade lanterns out of cardboard and transparent colored paper. Some of these lanterns are quite intricate. They hang the lanterns on long poles and march through town. After the procession the people reenact the legend of St. Martin.

On November 30, St. Andrew's Night is celebrated. Young girls, before retiring for the night, may perform rituals to predict the identity of their future husbands.

About four weeks before Christmas, approximately December 1, many Germans observe the first Sunday of Advent. Advent is a time of introspection and preparation looking forward to the birthday of the Christ child. It is observed during the four Sundays before Christmas.

On St. Barbara's Day, December 4, early budding cherry branches are cut and put in a warm place to bloom for Christmas.

On the 13th of December children gather and parade through town singing carols. At the end of the parade route they perform a play about the Nativity.

On December 21, St. Thomas's Day, the air is filled with the aroma of rich fruitcakes baking. After all the baking is finished the people gather to dance the night away.

The big Christmas celebration begins on December 23, the Eve of the Eve. It is said that the Virgin Mary and flights of angels fly overhead bringing advanced word of the Christ child's birth. On Christmas Eve, December 24, the Christmas baking is done, presents are wrapped and distributed, and the Christmas tree is decorated. Children leave lists of gifts they wish to receive on the window sills for the Christ child, the Christmas gift giver in Germany. The main dish for supper on December 24 is carp. Brass bands serenade passersby with Christmas carols, and people attend midnight church services. On Christmas day Catholic and Lutheran families attend church services. Goose is the meal of choice, and families spend time with each other.

Epiphany (January 6), also known as Twelfth Night or Festival of the Three Kings, is celebrated by eating Kings cakes. Kings cakes are baked with a bean inside. The one who finds the bean becomes king of the feast and is allowed to give ridiculous orders to those around him or her.

The final night of the Christmas season comes on January 13 and is known as Octave of Epiphany. Groups of four boys each march around town singing "star songs." One boy carries a lighted star on a pole while the others are dressed as the three kings. Some groups carry a crib filled with good things to leave with a needy family.

During the Middle Ages Paradise plays, also known as Mystery plays or Miracle plays, were performed around Christmas time. The play told the story of the creation of Adam and Eve, their temptation and sin, and their banishment from the Garden of Eden. The play ended with the promise of a coming Savior who would save mankind from their sins. One of the props used in that play was called a paradise tree. This tree was decorated with apples. As time went on immoral elements were added to the play and the actors became irreverent in their portrayal of God's Word so the church banned the play. The people were not ready to give up this Christmas tradition so they brought the Paradise tree into their homes where they added small white wafers, symbolizing the Holy Eucharist, to the tree's decorations. These wafers were later replaced with pastries, cookies, and cakes.

Traditionally the Christmas tree was brought into the house on Christmas Eve day. It was secretly decorated and revealed to the children of the household in all its splendor later that night. Today many families are choosing to put up their Christmas tree soon after the start of the Christmas season so they can enjoy it longer.

Germany has always been known for its blown glass Christmas ornaments. In the 1700s, before blown glass ornaments appeared, tin ornaments of various shapes and sizes designed to reflect the lights of the room adorned the Christmas trees. Then, in the 1800s, wax-cast ornaments decorated with cardboard and ribbons appeared. Silver and gold embossed cardboard ornaments and carved wood ornaments were all the rage in the late 1800s and early 1900s. Icicles, made of silver foil, started appearing on Christmas trees in 1878.

In the 1860s a family in the town of Lauscha began making mouth blown, hand painted Christmas ornaments. The family could make between 300 and 600 ornaments per year. In the 1890s molds were first used to make blown glass ornaments. This improvement in the glass-blowing process allowed families to make ornaments more quickly and more economically.

To this day the most collectable glass ornaments come from the Lauscha region of Germany.