Christmas Around the World — China 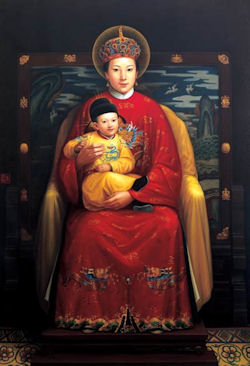 Christians in China call Christmas "Sheng Dan Jieh," meaning Holy Birth Festival. Many of them celebrate the birth of Christ by attending church services. Churches report that attendance at these Christmas services is growing every year even among non-religious people.

Just as with other festivals people enjoy decorating their houses for Christmas. Christmas trees, known as "trees of light," are decorated with paper chains, paper flowers, and paper lanterns. Houses are lit with beautiful paper lanterns.

Santa Claus does make an appearance in China where he is called Dun Che Lao Ren, Christmas Old Man, or Lan Khoong-Khoong, Nice Old Father. Children do not leave him cookies and milk or write him letters asking for gifts, but they enjoy seeing Santa in the malls and marketplaces of China and getting photographs made with him.

Traditionally, gifts are not exchanged at Christmas but at the Chinese New Year instead. As years go by and Christmas becomes a bigger part of the Chinese culture, however, exchanging Christmas cards and gifts at Christmas time is becoming more popular.