Christmas Around the World — Israel 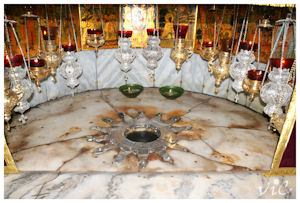 It is late. The streets that were crowded with people, animals, and soldiers during the day are now deserted. Suddenly the silence is broken by the cry of a newborn baby. A new life has entered the world. Not just any life, but one that has been promised for centuries. This life is God's gift to mankind.

Christians of all ethnicities and denominations gather each year from mid-December to mid-January to celebrate the birth of Jesus in the little town of Bethlehem in the small country of Israel. For the most part the inhabitants of the town look on as the world celebrates selling food, nativity scenes, crucifixes, and other wares in street bazaars encouraging the Christmas tourists to leave some of their money in the little town in a little country. Other inhabitants may participate in the celebration. Some may participate for the fun of it. Some join out of curiosity, and others to worship.

On December 24 the Roman Catholic Latin Patriarch of Jerusalem leads a procession from Jerusalem to Bethlehem, approximately 5 miles, to the Church of the Nativity. The Church of the Nativity was built in AD. 325 by Roman Emperor Constantine and rebuilt in the 500s by Emperor Justinian. The church houses the Grotto of the Manger. The Grotto is about the size of a railroad car illuminated with many candles. Incense is burned until the air is thick with it. A fourteen-point silver star marks the place believed to be the spot of Jesus' birth. The grounds of the church also houses St. Catherine's Roman Catholic Church, an Armenian Monastery, as well as churches and buildings of other faiths.

The Roman Catholic Christmas Eve service begins late in the evening with bell ringing, impressive choirs, and a solemn High Mass. After midnight, Catholics leave mass and proceed to the Grotto of the Manger where an effigy of the Christ Child is placed on the silver star. Then they return to St. Catherine's to finish the service. Other denominations and faiths holding services on December 24 also visit the Grotto.

Protestant Christians tend to meet in one the field outside Bethlehem where, according to tradition, the shepherds heard the angels proclaim the Lord's birth. Roman Catholics and Eastern Orthodox Christians may also meet in rival shepherds fields. At these meetings choirs lead the worshipers in singing Christmas carols filling the night sky with beautiful music reminiscent of the angelic choir that first Christmas.

While most Israelites do not celebrate Christmas (they celebrate Hanukkah instead), Christmas is celebrated in the Holy Land. Tourists from all over the world gather each Christmas to commemorate the birth of Jesus born to "save His people from their sins." (Matthew 1:21)