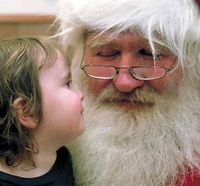 In putting on the suit and entering the sleigh, the wearer waives any and all right to any previous identity, real or implied, and fully accepts the duties and responsibilities of Santa Claus, in perpetuity to which some time the wearer becomes unable to do so, by either accident or design. – Bernard, The Santa Clause

Each year thousands of people put on a Santa suit and appear as the jolly old gent in parades, in malls, at parties, or at other private or public events. With all the people who portray Santa Claus it can be hard to believe that this custom is less than 150 years old.

It was not until 1822 and Clement Clark Moore's vivid description of Santa Claus that people had an idea what Santa looked like. By the 1840s stores began adding pictures of Santa to their Christmas advertisements. In 1841 a store in Philadelphia advertised that children visiting the store would see a life-size model of Santa Claus. In 1890 in Brockton, Massachusetts James Edgar advertised that Santa would put in an appearance in his department store. Children all over the state begged their parents to take them to Edgar's store to see Santa Claus increasing Edgar's sales in the process. Also in the early 1890s the Salvation Army dressed a number of unemployed men in Santa suits and sent them into the streets of New York City ringing bells asking for donations to pay for the free Christmas meals the Salvation Army gave to needy families.

In 1924 immigrant employees at the Macy's store in New York City decided to put on a parade showing their thankfulness for being able to live and work in the big city. What better day, they decided, than to host the procession on Thanksgiving Day. They decided to cap the festivities with the arrival of Santa Claus in his sleigh, a tradition that has continued to this day.

Now Santa Claus appears almost everywhere. He visits children of all ages at stores and malls in specially decorated areas well-suited for photographs with Santa. He is also popular at community events, parties, and private homes.